Known districts in the Borough of Barnet

HomeKnown districts in the Borough of Barnet Barnet is London’s second most populous boroughs with over 370.000 residents. It covers an area of 33.49 square miles and has a density rate of 11.000 people per square mile. The borough lies in the northwestern parts of the city and comprises of 37 districts. It is part of the EN, HA, N and NW postal code areas. Barnet is the location of several well-known listed edifices, touristic sites, monuments and landmarks.

The district of Brunswick Park lies in the eastern parts of the borough of is known throughout the English capital for being the location of several public sporting facilities and recreational grounds. St. Andrew the Apostle Greek Orthodox School is the area’s most acclaimed educational institution. It was founded in 2013 and provides secondary education to boys and girls from the ages of 11 to 19. The school is expected to have a student body of approximately 1050 pupils by 2019. Since its opening it has won numerous awards. Brunswick Park, N11, doesn’t have its own tube or railway station. It is linked to the other areas of the city by numerous bus routes which pass through it regularly.

Friern Barnet, N11, shares a common boundary with Brunswick Park and is situated at about seven miles from the intersection of Charing Cross. The area is home to two listed buildings, the Church of England parish church of St. John The Evangelist (Grade II*) and the former Friern Barnet Town Hall (Grade II). It is also the location of Friary Park a nine hectare green area which was once a formal Edwardian park. The “Bringer of Peace” a statue that honours King Edward VII is the green area’s main feature. The monument was erected on May, 7th 1910, a day after the king’s passing. Just like its neighbour, Friern Barnet is only served by bus routes.

Finchley, N3, is one of Barnet’s most popular districts. It is identified as a residential neighbourhood and is divided into three sub-areas:

The Archer is perhaps the district’s most renowned landmark. It is a 10-foot tall statue which was created by British sculptor Eric Aumonier and is situated in close proximity to one of the area’s main transportation hubs East Finchley Tube Station. 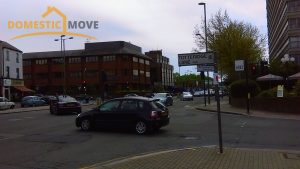 The suburb of Burnt Oak is neighboured by the districts of Edgware from the north, Mill Hill from the east, Queensbury from the west and Colindale and south. It is served by its own tube station which was opened in 1924 and sits on the Northern Line from the London Underground. It is used by over four million people annually.

The Hale is an area that lies in close proximity to Burnt Oak, HA8. It has a population of about 17.000 people and despite being a residential area it has its own retail area where several well-known public houses, restaurants and independent shops are situated. The Hale, NW7, is mainly inhabited by the working class, most of whom are commuters who work in the other parts of London.

Hampstead Garden Suburb, N2, is one of the borough’s most beautiful and notable districts. It comprises of just over 5.000 properties and is home to approximately 13.000 people. The entire area is described as one of the city’s finest examples of early 20th century domestic architecture. Hampstead Garden Suburb is home to a number of mind blowing green areas and throughout the years have been inhabited by several notable men and women.

The area of Golders Green, N11 lies in the southern parts of Barnet at about five miles from the intersection of Charing Cross. The district is known for its predominant African, Jewish and East and Southeast Asian communities. It is also the location of several famous religious sites, including the Carmelite Monastery.

The Burroughs, N4, is a locality and civic districts which is renowned for its magnificent buildings. The Town Hall is perhaps the area’s most distinguishable buildings. It was built in 1901 and designed by T. H. Watson. It was here that Margaret Thatcher held her first speech as British Prime Minister.

Grahame Park is a residential district which was once the site of the old Hendon Aerodome. It is served by several bus routes while the nearest rail links are located in the neighbouring districts.